Star Wars: The Force Awakens comes to theaters today! The moment is therefore ideal to learn to remake the famous generic with a little bit of HTML and CSS. 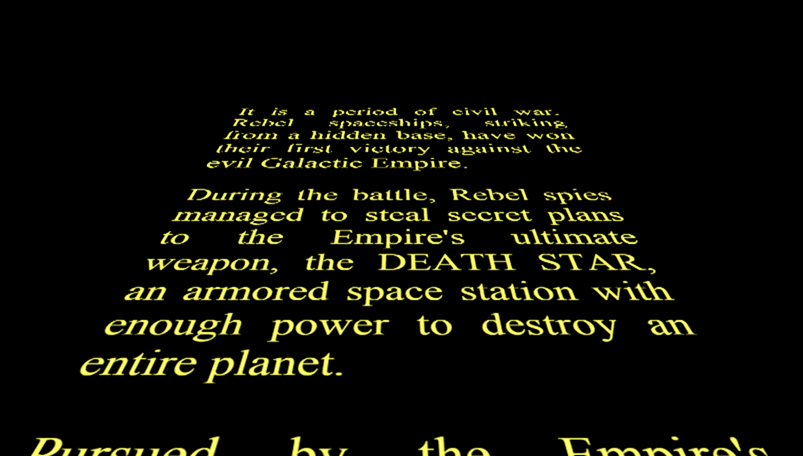 Here is the very simple HTML. The first div contains the initial text of the animation. This one is visible in the middle of the screen then disappears to make room for the scrolling text:

The CSS is a bit more complicated so let's go step by step. Let's start with the simplest, the black background and the yellow text:

Flexboxes are still not used much (mainly because of the compatibility) but are very practical for the placement of elements, including for simple cases such as vertical centering. To learn more, you can view the documentation about flexbox on MDN.

Then you have to display the first sentence in the middle of the screen and make it disappear. For that, I use the animation property and @keyframes. This allows you to set the value of each property to animate during the animation. The timing-function is the interpolation function to use to move from one state to another.

For scrolling text the idea is the same, use animation to move from the bottom to the top of the screen. To get the impression that the text is moving towards the horizon, we use a 3D transformation: transform: perspective (280px) rotateX (25deg);.

Here is the result of this transformation on a square: 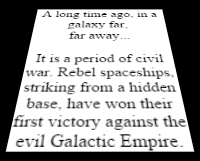 To go further it is possible to add some music via the HTML5 audio tag. Remember to use several formats to be compatible with the main browsers:

No need for new technologies, good ideas, and a little do-it-yourself can do a lot of things 😃